A Pivotal Change for the Future

A Pivotal Change for the Future

November 30, 2021 – The lumber market has changed forever. At time of writing the south of the province of British Columbia is under a state-of-emergency due to relentless stormwater accumulating over the past month. That after record rainfall of 200% more than normal for the months of September and October.

Transportation is completely stopped. Two weeks ago after the first atmospheric river (deluge) all four highways and both rail lines were wiped out. Since then 2 of those highways — technically roads — have been cleared, however these do not connect Vancouver to the rest of mainland Canada. Both rail lines have only just been repaired.

In the interim, the Port of Vancouver (the third largest by volume in North America) was closed. Currently the Port is re-opened, however the backlog of ships waiting to unload has grown from seven last week to 50 this week. As the torrential rain continues to come down, it is unknown how this will play out over the next week and month.

What we do know right now is that West Fraser announced downtime at it’s western operations. According to a company release, lumber shipments are down almost 30% and pulp shipments are down more than 80%. The company also stated that 4Q demand has been “more than expected”.

Madison’s indicates that this means lumber sales will not slow down for the usual seasonal break, and will come back strong in January. As they started off this year. 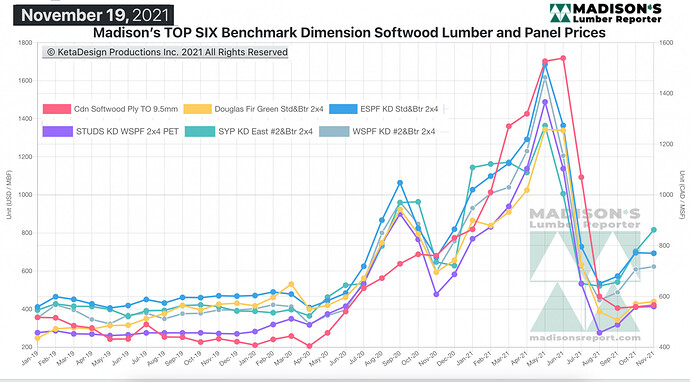 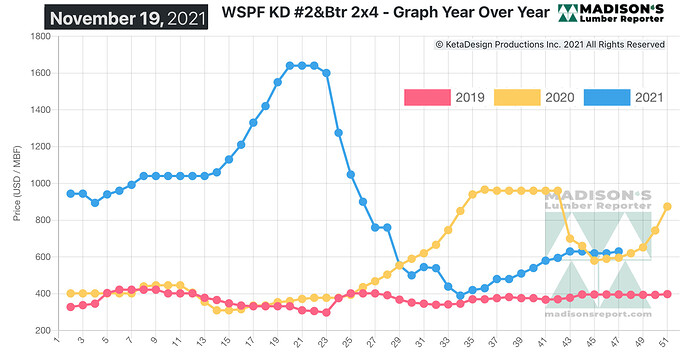 @Madison_s_Lumber_Rep thank you for this report! Prices have been relatively stable for the past few weeks, do you think with this pressure on supply coming from BC, we could see them rise substantially in the coming weeks? Similarly to the volatility experienced earlier this year and last year? Or is the shock from this area too small for a significant increase like those?

It looks like the supply constraints in BC are having a big effect on the overall market, mostly because folks have been running on very lean inventories in the hopes that prices would go down.
Meanwhile US housing activity continues incredibly strong.
Historically at this time of year prices would be getting quite soft, not so last year and this year the trend line is matching last year very closely.

Looks like 4Q lumber last year started a fundamental shift. We already know Jan 2022 is going to be very hot again (like this year).