The European Union is on pace for a record fire season. Waves of extreme heat, compounded by widespread drought conditions, provoked a summer of devastating blazes. According to the European Forest Fire Information System, about 1.6 million acres of land — equivalent to an area more than eight times the size of New York City — burned across the continent so far this year. That figure is 56 percent higher than a previous record set in 2017 and double the annual average calculated between 2006 and 2021, according to the E.U. agency. 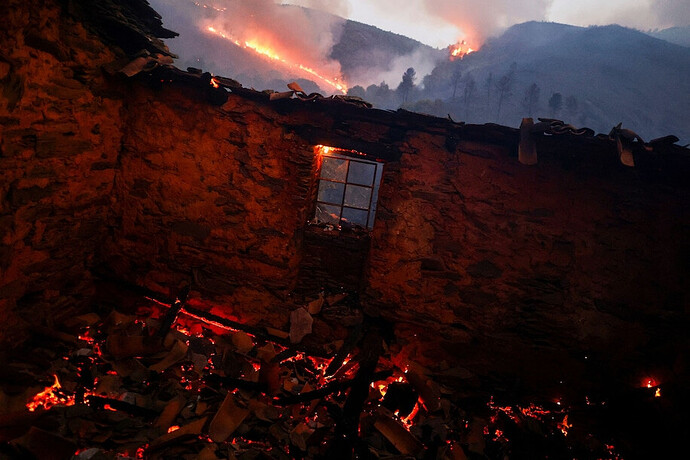 Spain, Romania and Portugal were among the worst hit E.U. countries; thousands of people died amid soaring temperatures. Last week in the southwestern Gironde region of France, home to Bordeaux’s famous vineyards, hundreds of firefighters from across the European Union rushed in to help combat a wildfire sweeping through thousands of hectares of pine woods.

The ongoing drought in many parts of Europe is both a cause and effect of the continent’s extremely hot summer, as my colleagues at The Post’s Capital Weather Gang explained: “The hotter weather dries out the landscape, which dries the atmosphere, in turn making the air easier to heat up. That cycle is extremely difficult to break, particularly when the overarching weather pattern favors ridging, or the establishment of broad high pressure, over Europe. That high pressure ‘heat dome’ deflects inclement weather, including rain, to the north, allowing Europe to bake beneath inescapable sunshine and anomalous warmth.”

Analysts expect these conditions to only worsen in summers to come. A report from the European Commission, the executive wing of the European Union, warned that “climate change is aggravating the situation, making countries more prone to wildfires and increasing the intensity of such events.”

In the Ukraine war, a battle for the nation’s mineral and energy wealth

There is a parallel, more immediate crisis also building up in Europe. The Russian invasion of Ukraine has triggered a major set of sanctions on Russian exports and forced E.U. governments to push forward plans to wean themselves off Russian gas. But the transformation in European energy consumption won’t come fast enough for this winter, and countries across the continent are bracing for surging heating costs.

“The winter is coming, and we don’t know how cold it will be, but what we know for sure that [Russian President Vladimir] Putin will continue to play his dirty games,” Jozef Sikela, the Czech Republic’s minister of industry and trade, said last month following meetings in Brussels.

On Tuesday, Russian state gas company Gazprom warned that European gas prices could rise a further 60 percent to more than $4,000 per 1,000 cubic meters, as it reckons with Western sanctions and diminished exports. The company reduced supplies to only 20 percent of the capacity of the Nord Stream 1 pipeline, which runs through the Baltic Sea to terminals in Germany.

Already, the price of gas in Europe is roughly four times what it was last year. Industrial output has been badly affected. E.U. governments have committed to a voluntary 15 percent reductions in their use of natural gas ahead of the winter. Many have mandated a slate of energy-saving measures while also trying to offer subsidies to help defray costs for households.

Local authorities have asked ordinary citizens to do their part — the Dutch, for example, have been urged to limit showers to five minutes and forswear using air conditioning or clothes dryers. Meanwhile, the energy emergency has forced major rethinks in policy, as well. On Tuesday, German officials said they are planning to delay shuttering their nation’s last three remaining nuclear power plants.

Where are Russia’s barrels of oil going?

Bracing for winter, no matter the current summer heat, Europeans are also taking a more rustic approach. As Bloomberg News’s Javier Blas noted recently, there’s been a remarkable spike in German Google searches for firewood. That’s hardly an anomaly. In Belgium and the Netherlands, prices for firewood have in some instances doubled. In war-torn Ukraine, municipalities are sawing down trees in preparation for the uncertainty that war and the biting cold may bring.

In Hungary, whose illiberal ruling government bucked the European trend and negotiated an increase in Russian gas imports, authorities have also loosened logging restrictions in a bid to boost firewood stocks. That decision triggered protests in Budapest last week, as thousands marched against measures they viewed as harmful for the environment.

“This is our common future,” a protester named Fanni Fodor told Reuters. “We all feel the effects of the climate change on our skins and cutting down trees will only make it worse.”

Climate change, of course, is not ancillary to the energy crisis gripping Europe. Drought and high temperatures have depleted the continent’s rivers, to costly effect. “The energy crisis is being exacerbated by very low water levels at key waypoints on Europe’s rivers that are making it difficult for diesel, coal and other commodities to be transported through the continent,” reported Bloomberg News. “Utilities could end up using more gas as an alternative.”

Even as the summer reminded many Europeans of the shared dangers posed by climate change, a cold winter and skyrocketing heating bills may provoke new divisions. Governments in the short term are racing toward stocking up on whatever fossil fuels they can, as prices for coal and natural gas surge. Jason Bordoff, an American energy expert and former White House adviser to Barack Obama, told New York Times opinion writer David Wallace-Wells that while European governments prepare for the winter, their energy stores may prove to be insufficient.

“There are going to have to be efforts taken to curb demand as well and to prepare for the possibility of really severe energy rationing this winter,” Bordoff said. “I think now you’re seeing — in terms of the efforts toward efficiency and rationing — some countries are more willing than others. If things become really severe this winter, I fear that you could see European countries start to look out for themselves rather than one another.”