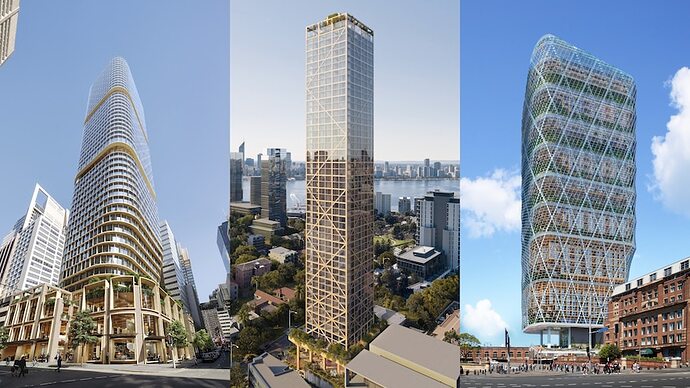 Each of these proposed buildings would more than double the height of the current world’s tallest timber skyscraper.(Supplied: Bates Smart, Grange Development, Atlassian)

Timber skyscrapers up to 50 storeys tall may soon dot Australian skylines in a push to decarbonise and revitalise urban construction.

Three separate plans have been submitted to build hybrid timber buildings in Perth and Sydney between 180 metres and 220 metres high.

Each would more than double the height of the current world record-holder, an 86.6-metre apartment building in Milwaukee, USA.

Timber skyscrapers are made possible by hybrid construction, which uses engineered “mass timber” around a concrete core.

Developer James Dibble, whose proposal for a 47-storey apartment building in Perth is before the state development panel, said hybrid technology puts timber on par with concrete and steel.

“There is not really any limitation to height other than the limitation of physics like any other building, to be frank,” he said.

“I think a 350 metre hybrid building is possible, which is almost twice the height [of the Perth apartment building].” 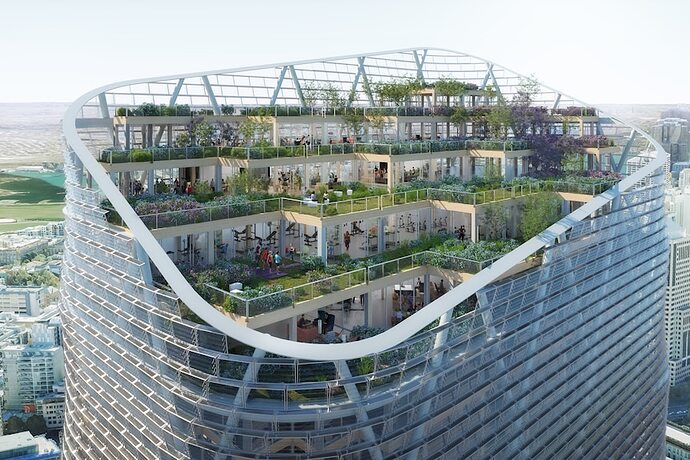 The 180-metre, 40-storey Atlassian headquarters in Sydney is already approved for construction this year. Two other planned timber skyscrapers are before state development panels.(Supplied: Atlassian)

Cement and concrete manufacturing is estimated to produce about 8 per cent of the world’s greenhouse emissions, whereas timber naturally sequesters carbon, even after the tree has been cut down.

Softwood plantation trees like pine grow fastest in their first few decades and can be harvested for construction timber at about 30 years old.

Between growing, harvesting and processing, timber is more expensive than concrete and steel construction but some developers are willing to pay the premium for its sustainability credentials.

James Dibble estimated his planned Perth tower, which is marketed as carbon negative, will cost “about 9 per cent” more than a wholly steel and concrete structure.

“There’s got to be a recognition that the built environment is one of the three main contributors to climate change,” he said.

"We’ve seen huge evolution in terms of animal agriculture and transport and not very much has been done [in construction].

“And I would remind everyone that you can’t grow concrete. If concrete was a country, it’d be the third highest emitter in the world.”

Besides eco-marketing, timber’s big selling point is its aesthetic value — a natural counterpoint to the sterile greys and whites that dominate urban design.

In 2023, Murdoch University in Perth will open Boola Katitjin, a building that puts its timber on full display inside and out. 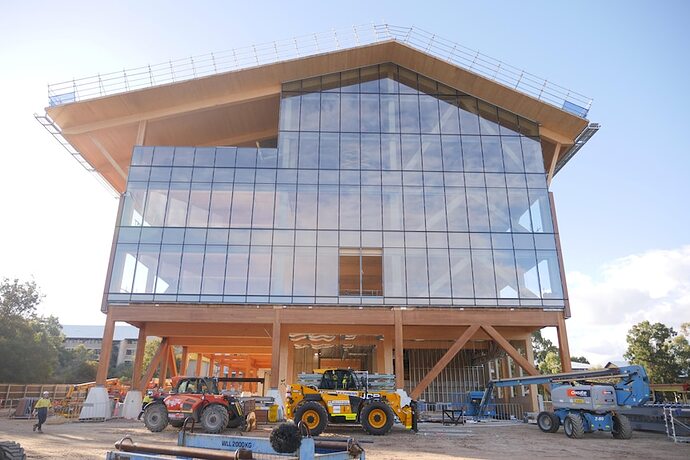 “Every time we bring people through, be it visitors, be it future staff members — everyone instinctively goes over and touches the surface of the columns,” Multiplex design manager Jamie Cook said.

“It really is a natural material that everyone wants to get up close and personal to.”

What is mass timber?

Mass timber is wood that has been engineered to strengthen it against the structural weaknesses of sawn logs.

“We could not build a 183-metre building out of mass timber only. It’s not technically possible,” Mr Dibble said.

“Where mass timber is superior we used it and where it wasn’t, we didn’t. That ultimately ended up with a hybrid structure that is 42 per cent mass timber.” 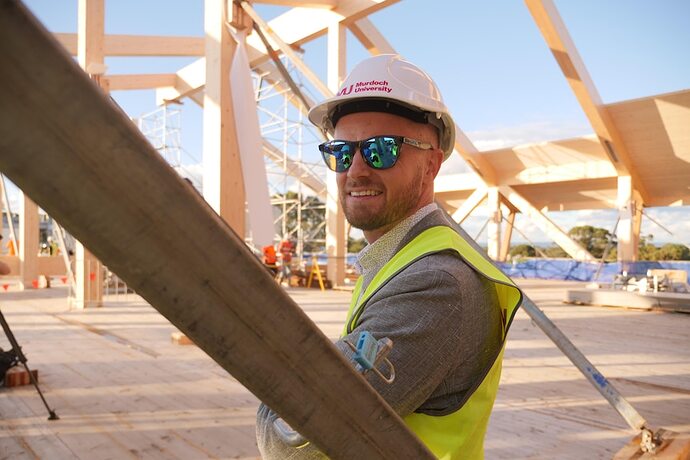 “We are absolutely confident that timber will perform as well if not better [than steel],” Boola Katitjin project director Daniel Price said.(ABC: Angus Mackintosh)

He also said that superiority extended to fire and weather protection.

"Mass timber can out-perform steel in terms of fire. It will self-extinguish.

But to protect against South Perth’s high water table, a concrete base was deemed more suitable.

“That is built with concrete, the core is concrete, the columns are concrete, but pretty much everything else can absolutely be done in timber and in those applications mass timber is superior,” Mr Dibble said.

The federal government vowed to expand Australia’s timber plantations by one billion trees over a decade. Three years later, less than 1 per cent of that goal has been planted. 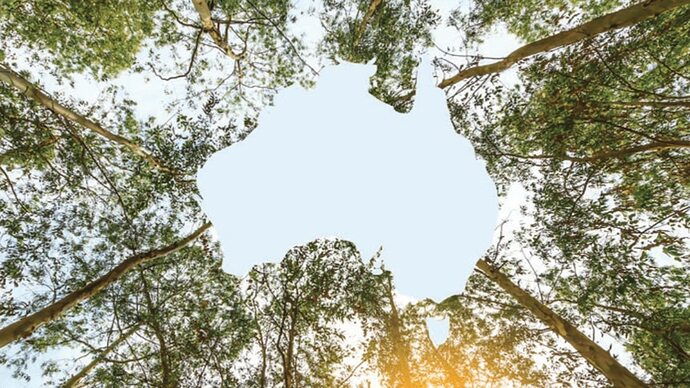 An Australia-shaped gap in a tree canopy, seen from below.862×485 169 KB
Read more](Plan to plant a billion trees yet to take root three years after target set - ABC News)

The timber industry calls wood the ultimate renewable, but there’s a catch.

Australia is a net importer of construction timber and there aren’t enough softwood plantations nationwide to fill its future needs.

Native hardwood logging is being phased out in some of Australia’s largest forestry regions including WA and Victoria, where Boola Katitjin gets its blonde exterior from one of a handful of domestic mass timber manufacturers.

And the building’s interior isn’t Australian at all.

“The columns, beams and the CLT floor plates are all spruce, which is a European softwood,” lead subcontractor Ian Meachem said. 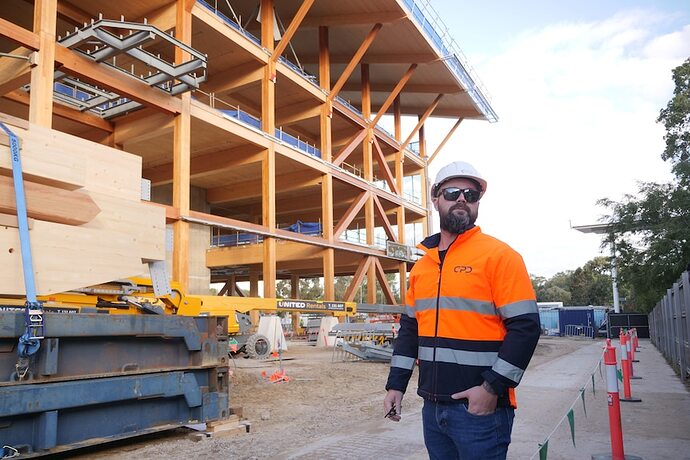 Ian Meachem said European spruce was chosen as a sustainable softwood that could be supplied in enough volume for Boola Katitjin.(ABC: Angus Mackintosh)

“The pure volume of timber required, the Australian market just isn’t at a point where it can economically or viably supply a project of this size.”

Australia’s mass timber manufacturers are growing to meet that demand, but some in the existing sawlog industry aren’t concerned about the competition.

Richard Schaffner is chief technical officer at Wespine, a West Australian sawmill that processes as much wood as it can into construction-grade logs.

Even then, he said only 60 per cent was suitable. 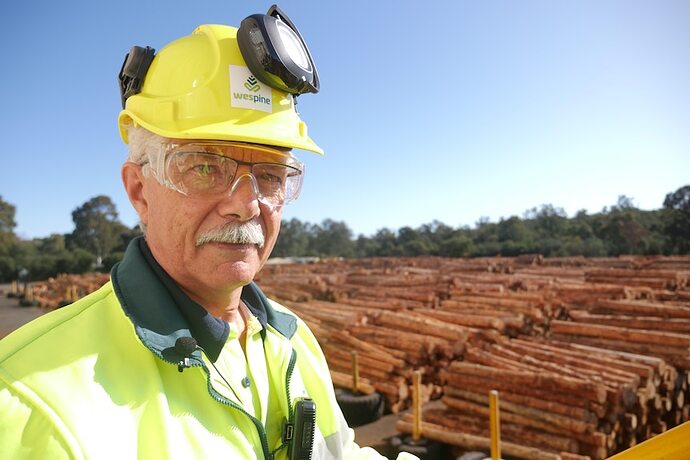 “The balance is split roughly half and half between landscaping and packaging [wood chip products],” he said.

"Some of this could be redirected to engineered structures.

“It won’t necessarily mean we’ll have a shortage of timber for home building.”