The construction labor market is cooling off as economic activity slows in response to tighter monetary policy per the latest job openings data.

Given the Fed’s dual mandate of fighting inflation and maintaining maximum employment, macro price and jobs data are key to informing the Fed’s future policy moves. Inflation remains near a 40-year high and payroll employment growth is seemingly hot. According to BLS July estimates, payroll employment grew by 528,000 positions. However, the jobs numbers continued to be influenced by a post-covid service sector rebound. Consequently, the Fed needs to be watching the open jobs data to see if the labor market is slowing.

And the overall numbers are consistent with a slowing employment market. The count of open jobs for the overall economy fell from 11.3 million to 10.7 million in June. This marks the third consecutive monthly decline after the job openings total reached an all-time high of 11.9 million in March. As this total declines in future months, it will weaken a source of inflation pressure as tighter monetary policy slows the economy. In fact, it can be argued that the job openings total is more important for monetary policy than the monthly jobs total as employers slow recruiting during the second half of 2022. And as job openings slow, it will provide data support for the Fed to slow tightening of monetary policy. 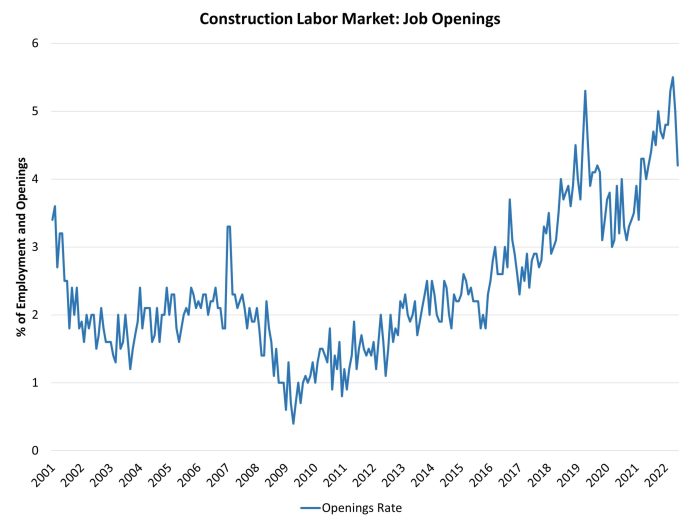 As forecasted over the last two months, the count of open construction jobs is now falling, declining from 405,000 in May to 334,000 in June. The construction job openings rate ticked down to 4.2% in June, after reaching a data series high of 5.5% in April.

The housing market remains underbuilt and requires additional labor, lots and lumber and building materials to add inventory. However, the market is slowing due to higher interest rates, yielding an slowing of the count of unfilled positions in the sector. Hiring in the construction sector dipped to a 4.5% rate in June. The post-virus peak rate of hiring occurred in May 2020 (10.4%) as a rebound took hold in home building and remodeling.

Despite slowing of building activity, construction sector layoffs remained low at a 1.7% rate in June. In April 2020, the layoff rate was 10.8%. Since that time however, the sector layoff rate has been below 3%, with the exception of February 2021 due to weather effects.

Looking forward, attracting skilled labor will remain a key objective for construction firms in the coming years. However, while a slowing housing market will take some pressure off tight labor markets, the long-term labor challenge will persist beyond an ongoing macro slowdown.