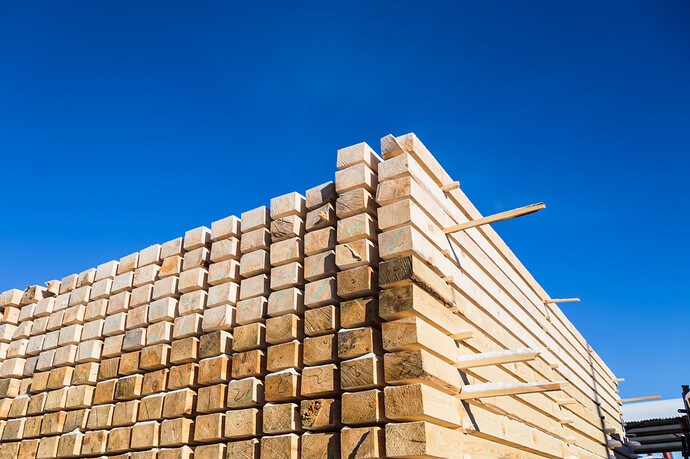 As recent supply-demand imbalance worked out, and for the usual time of year when buying slows, North American prices of most softwood lumber and panel commodities dropped significantly in the third week of May. Interestingly, this correlates almost exactly to where prices were at the end of June last year, both in trendline at actual price levels. Indeed, for the week of July 5, 2021, the price of benchmark lumber item Western S-P-F 2x4 was in the middle of a big drop downward from previously unimaginable highs, at US$760 mfbm, compared to US$700 toward the end of May this year. While prices might fall still a little bit more during June, they are not expected to reach the lowest point of last year; when they were US$390 mfbm during September, then immediately started rising again.

Most industry folks agree that the extreme volatility of spring 2020 to late winter this year should be worked out, and – while prices could still fluctuate quite a bit – levels are stabilizing. So those highest-highs and lowest-lows of the past two years should be behind us, as the “new normal” is becoming recognizable. 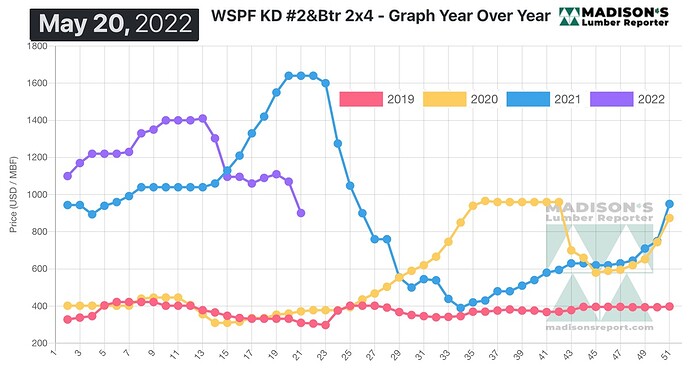 Sawmills marched closer to their static order files, which were into the last week of May or first week of June depending on item and source. 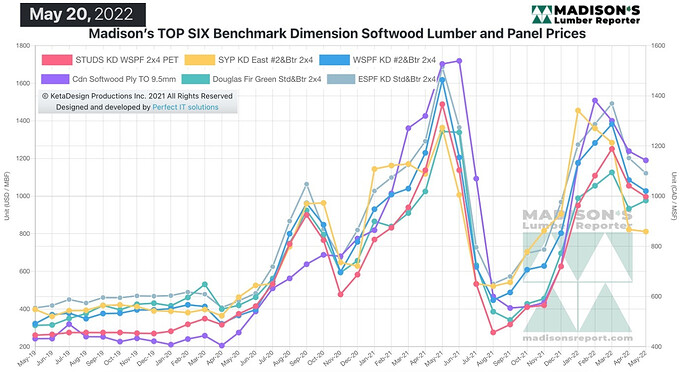 As spring building season should be ramping up into full swing, a tentative sense of worry permeated the lumber market. Buyers in the United States showed virtually no urgency, only buying from those from suppliers who could guarantee quick shipment.

Downward pressure late the previous week in Western S-P-F lumber rolled resoundingly into according to Canadian suppliers. The market as a whole had a benighted feel to it. Asking prices varied considerably between producers in Western Canada as large national sawmills and smaller regional facilities jockeyed for limited orders with aggressive numbers depending on the item, source, and destination. Secondary suppliers remained busy furnishing the most desperate buyers with non-discounted, quicker-shipping transactions.

Purveyors of Western S-P-F studs in Western Canada described a softening market, with prices correcting and many purchasers retreating to the sidelines in hopes of buying the bottom. Scattered sales activity persisted from customers looking to cover immediate needs, but supply appeared to be firmly ahead of demand. Sawmills order files remained into early- or mid-June.”

Interesting how the prices right now are the same as end of June 2021, despite the difference in social and economic environment.

What are common uses for low grade logs? Maybe I know some folks who might be interested

Interesting comment @Madison_Hibner! Gives precedent to the idea that recent prices might represent the “new normal”. Are we ever going back to the prices levels we saw in 2019?

It’s incredible that the current market level is being seen as a low point in a bear cycle … when prices today are still double the highs of 2019!

Railroad ties, pallet lumber, scaffolding…
6×8, 5quarter and 44s are the main thing being cut in the last low grade Mill I was at.

New Normal was caused by a pandemic that crippled the world. The pandemic appears to have changed a lot of things but $1000 lumber 🪵 on a regular basis isn’t the new normal in my opinion