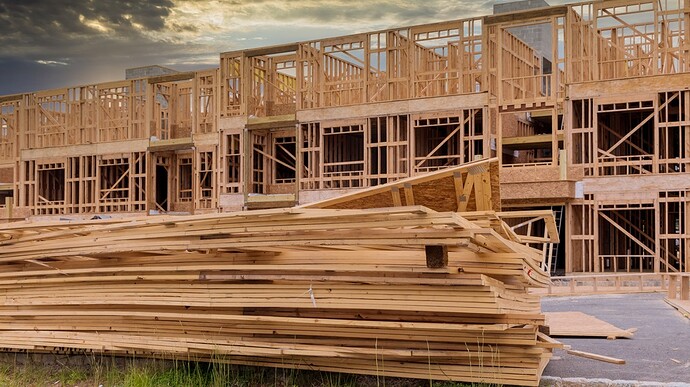 A lawsuit to stop the importation and sale of substandard structural plywood from Brazil has ended in a permanent injunction barring a long-time certifier from operations in Brazil. The suit alleged false advertising, loss of revenue and negligence related to the structural plywood failing to meet U.S standards and was therefore unsafe. In a Ft. Lauderdale federal court on May 24, Judge Roy Altman entered a permanent injunction requiring the revocation of all PS 1 certificates issued by PFS-TECO to over a dozen Brazilian mills producing structural plywood for the U.S. market. The decision forces wholesalers and retailers to immediately consider these products off-grade and to either obliterate the PS 1 stamp on the plywood before resale or destroy it.

The substandard plywood is produced by more than 30 plants in southern Brazil. Companies like PFS-TECO inspect and certify Brazilian plywood to meet the PS 1 structural standard prior to import and sale in the U.S. Building codes require that structural grade plywood panels incorporated into roofs, floors and walls of residential and commercial buildings in the U.S. are PS 1 certified for structural integrity. Although the Brazilian plywood was stamped PS 1 by PFS-TECO, it experienced massive failure rates during testing by the American Plywood Association and other testing laboratories.

In 2021 alone, Brazilian plywood accounted for 11% of all U.S. supply with nearly 1.2 billion square feet sold. While much of that plywood went into new construction throughout the U.S., it was also used to help rebuild homes and buildings in Florida and Puerto Rico following Hurricane Maria due to its cheaper price.

Thanks for sharing @Bill_D… (This sent shivers down my spine) “The decision forces wholesalers and retailers to immediately consider these products off-grade and to either obliterate the PS 1 stamp on the plywood before resale or destroy it.”

“The decision forces wholesalers and retailers to immediately consider these products off-grade and to either obliterate the PS 1 stamp on the plywood before resale or destroy it.”

Will they also be offering no support to businesses effected by this decision?

Next big Florida hurricane, I bet we will see a lot of PS 1 stamps over windows…

Wondering how this will effect the US downfall production market , how much material Brazilian product is out their NOW ?

Rather than dumping it all into the low grade market, It’s my guess that most of this new “no grade stamp” product will go to projects (shed builders?) that don’t need a grade stamp on their plywood, at a discount. Do you agree?

Soon Pakira’s directory will be released and you’ll be able to search by product (Brazilian plywood) and ask these guys ourselves. Further, the directory will help these Brazilian Plywood guys find new customers who buy “no grade stamp” plywood! Stay tuned…

I think it’s just the Teco PS-1 stamp that is not on grade. I see a lot of it for sale that just says PS-1 and trying to filter through all the data

For what it’s worth
Forest Wood Agency is grading product in Brazil and is certified to stamp PS-1. Besides that I don’t know . There’s always more to the story ???

You are on it, interesting…

The U. S. Structural Integrity Coalition, of which our company is a member, filed a Complaint in the US District Court for the Southern District of Florida Fort Lauderdale Division on 5/23/22. Same Court that is cited in the article above. The defendants are Forestwood Industries, Inc. (Grading Certifier) & American Association For Laboratory Certification, Inc. aka A2LA ( Accreditor ). The complaint contains all of the basic information of the prior settled case. First in the “Prayers of Relief” the coalition is asking for a preliminary and permanent injunction immediately.

I figured someone on the “inside” would know! Much appreciated!!

Gray , Is this due to the wood species , radiatta being quickly grown 15-20 yr rotation ? Or is it related from the species and too many voids in the core panels ?

The species grown in brazil used by the structural grade pine plywood manufactures is primarily made up of Pinus Taeda (Loblolly) & Elliotti (Slash). Both are commonly referred to in North America as Southern Yellow Pine.

With out going into great detail, the species taken to the southern hemisphere in more favorable and longer growing season does not exhibit the same strength. The tree ring growth; spring wood (light ring) to summer wood (dark ring) ratio is greater in the southern hemisphere and local climate in Brazil. The more late wood the higher the strength.

Todd Shupe is the expert.

Much appreciated and well said 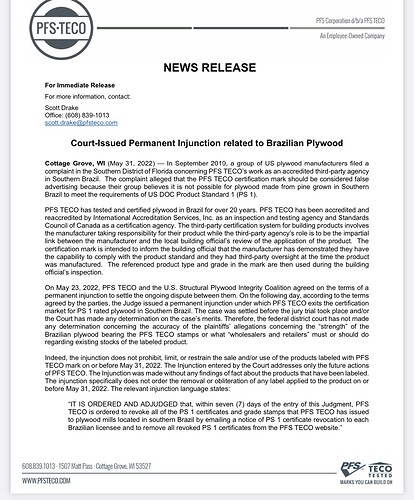 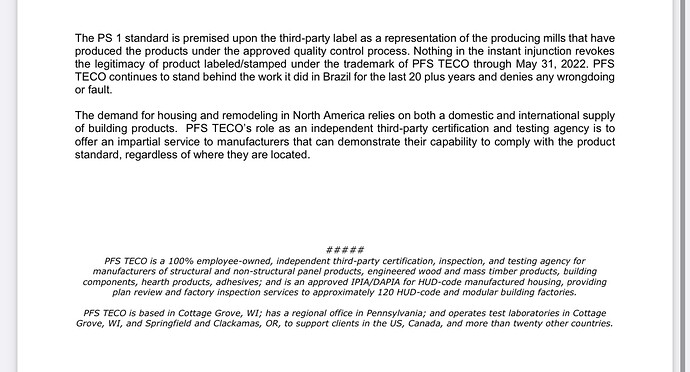 ADVISORY MEMO
TO: ALL BUILDING OFFICIALS IN MIAMI-DADE COUNTY

FROM: Jaime D. Gascon, P.E.
Board and Code Administration Division

It has come to our attention that Brazilian softwood plywood panels imported into the
United States bearing trademarks that state compliance with U.S. Voluntary Product
Standard PS-1, Structural Plywood have failed tests conducted at APA – The Engineered
Wood Association. They measured the structural performance of this panel type and the
results indicated that the imported Brazilian panels did not meet the stiffness requirements
of the designated spices grouping or the referenced span rating for roof sheathing as
defined in the standard.
A case between US Structural Plywood Integrity Coalition and PFS Corporation was
recently adjudged. On May 23rd, 2022, the United States District Court Southern District
of Florida ordered the New York based company doing business as PFS TECO barred
from licensing any PS-1 grade stamps to Brazilian plywood manufactures permanently or
until the injunction is lifted. Reference attached Case No 19-62225-CIV- ALTMAN.
The APA Product Advisory Group conducted a series of test on imported plywood products
from Brazil bearing the PS-1 stamp and concluded the plywood did not comply with the
standards for structural grade in the US. See attached APA Product Advisory.
Building officials and inspectors should be made aware of these inferior Brazilian Plywood
products bearing the PS-1 stamps and not accept these stamps as a means of indicating
code compliance.
If you have any questions on this matter, please contact Dexter Bleasdell, Senior Code
Officer at (786) 315-2556 (Office), (305) 815-3123 (Mobile) or via email at
Dexter@miamidade.gov.
Enclosures

Enclose:
UNITED STATES DISTRICT COURT
SOUTHERN DISTRICT OF FLORIDA
CASE NO. 19-62225-CIV-ALTMAN
U.S. STRUCTURAL PLYWOOD
INTEGRITY COALITION, et al.,
Plaintiffs,
v.
PFS CORPORATION,
Defendant.
___________________________________/
PERMANENT INJUNCTION &
ENTRY OF STIPULATED FINAL JUDGMENT
The parties have filed a Joint Motion for Entry of Permanent Injunction & Stipulated Final
Judgment (“Motion”) [ECF No. 464], seeking entry of this Permanent Injunction and entry of
Stipulated Final Judgment (“Permanent Injunction”). As set out in the Stipulation, PFS TECO has
consented to entry of the Judgment, waived findings of fact and conclusions of law, and waived any
right to appeal from this Judgment. Accordingly, the Joint Motion is GRANTED as follows:
I. PERMANENT INJUNCTIVE RELIEF
IT IS ORDERED AND ADJUDGED that, within seven (7) days of the entry of this
Judgment, PFS TECO is ordered to revoke all of the PS 1 certificates and grade stamps that PFS
TECO has issued to plywood mills located in southern Brazil by emailing a notice of PS 1 certificate
revocation to each Brazilian licensee and to remove all revoked PS 1 certificates from the PFS TECO
website.
IT IS FURTHER ORDERED AND ADJUDGED that PFS TECO is barred until this
permanent injunction is lifted from issuing any PS 1 certificate or grade stamp to any plywood mill in
Brazil.
Case 0:19-cv-62225-RKA Document 465 Entered on FLSD Docket 05/24/2022 Page 1 of 3