The forest industry in the US South has attracted increased interest and investment over the past few years. This relatively newfound attention is a result of the region’s competitive advantage over many countries worldwide. The benefits come primarily from the region’s surplus of timber supply, efficient infrastructure, and low wood costs.

The population of the southern states is also growing faster than elsewhere in the US; thus, demand for most forest products is expected to increase as consumers purchase houses, buy new furniture, remodel their homes, etc. A new Focus Report from Wood Resources International and O’Kelly Acumen presents the recent investments in forest production capacity in the US South and the continued positive growth-to-harvest ratio in the region (the report will be available in December 2021). The report also highlights plans for increased manufacturing capacity, reduced lumber import needs to the US, and export opportunities for forest products exports from the world’s largest softwood forest product-producing region.

Softwood fiber costs for pulpmills in the US South are currently the third-lowest in the world, behind only Latin America and Russia. Sawmills pay less for logs than most regions of North America and Europe. Log costs in the South are not only low, but they have also been relatively stable for a long time. Even in early 2021’s red-hot lumber market, sawlog prices remained low and only saw modest regional increases. According to the Wood Resource Quarterly, the steady price trends in the southern states contrasts with other regions of North America and Europe, where sawlog prices were substantially higher in the 3Q/21 than in the same quarter of 2020. The average log price jumped about 50% y-o-y in Western Canada and 12% in the US Northwest. The major lumber-producing countries in Europe saw their log costs increase between 15-65% from 2020 to 2021. 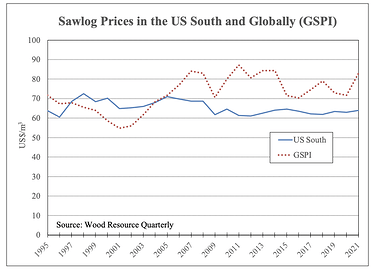 The average sawlog price for the US South ranged between $61-66/m3 in nominal terms since 2007, a narrow price spread. During the same period, the Global Sawlog Price Index (GSPI), representing 22 regions worldwide, has fluctuated between $71/m3 and $87/m3 (see chart). In 2021, the GSPI has averaged $83/m3, almost $20/m3 higher than the average price in the US South. However, there are intra-regional differences throughout the South, with prices in the Atlantic states generally having increased more than the Gulf states in 2021. Notably, sawlog costs rose between 12% and 22% from the 3Q/20 to the 3Q/21 in North Carolina, Georgia, and Florida, according to the Timber-Mart South.