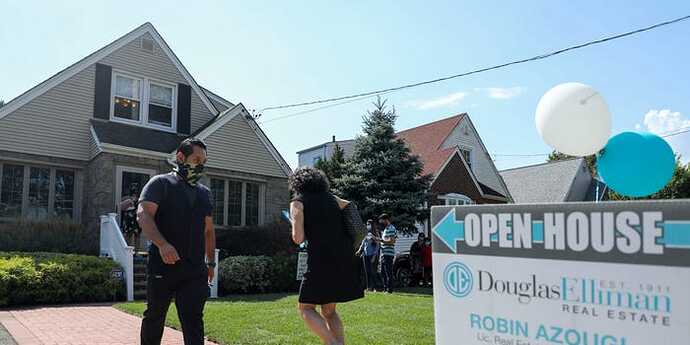 People wait to visit a house for sale in Floral Park, Nassau County, New York, the United States, on Sept. 6, 2020.

The year-long decline in lumber prices continued on Tuesday, with the essential building commodity falling 7% to $531.90 per thousand board feet after fresh housing data was released.

New home sales in the month of June fell at a seasonally adjusted annual rate of of 8.1% to 590,000, according to the US Commerce Department. That represents the lowest monthly sales since April 2020, and one economist thinks the decline will continue.

“As workers change jobs and adjust to the hybrid working environment, housing will likely weaken further in areas with high cost of living. Of course, the biggest factor behind the weakening housing market is the rapid rise in borrowing costs. We think there is more downside to go in housing,” LPL chief economist Jeffrey Roach told Insider.

Average mortgage rates for the popular 30-year fixed product have surged from about 3% at the start of the year to just under 6% today, and that rise has been especially painful for new home buyers as prices are not yet falling. The median new home price jumped more than 7% to $402,400 in June.

And the pain can continue as the Fed gears up for another expected 75-basis-point rate hike on Wednesday, likely sending mortgage rates even higher.

The new home sales data represents more bad news for homebuilders, as they rely on a strong housing market to sell their inventory into. A consistent fall in home sales should translate into lower building output from homebuilders, ultimately resulting in less demand for building supplies like lumber.

This dynamic has been unfolding since the start of the year when mortgage rates began to rise, according to various homebuild surveys. And the decline can in homebuilding activity can be seen in the price of lumber, as it has fallen 53% year-to-date.

If the slowdown in housing continues, it’s difficult to see demand picking up for lumber, which means prices are likely to remain well off last year’s highs. And the going could get even tougher as worries of an imminent economic recession continue to rise.