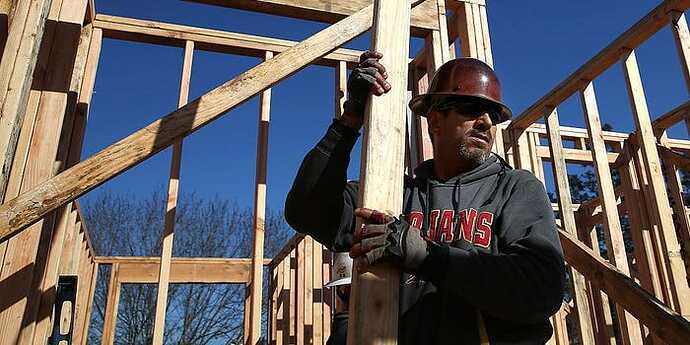 Get the inside scoop on what traders are talking about — delivered daily to your inbox.

Lumber prices fell as much as 6% on Monday to hit its lowest level so far this year, falling below $800 and hitting a low of $780 per thousand board feet.

The decline extends an already tough year for the essential building commodity, with lumber prices down 30% year-to-date, and down 13% over the past week. The decline comes as mortgage rates soar to levels not seen since 2009, raising the cost of buying a home in the US considerably.

The popular 30-year fixed mortgage rate hit 5.27% last week, well above the 3.11% rate it was at the start of the year. That more than 2% difference can lead to a monthly mortgage payment difference of well over $1,500, depending on the price of the home.

The swift rise in mortgage rates is starting to have a negative impact on demand in the home building market, according to a recent survey conducted by John Burns Real Estate Consulting. That could be adding to the downside pressure in lumber prices.

The top themes of the homebuilder survey were a slowdown in entry-level housing demand due to “payment shock,” investors pulling back, and a ripple effect of rising rates moving up market, according to Rick Palacios Jr., director of research and John Burns Real Estate Consulting.

A homebuilder in Dallas said, “interest lists are shrinking or buyers are truly pausing,” while a Houston homebuilder said, “many first-time buyers simply no longer qualify with the increase in interest rates, as their debt-to-income ratio gets out of whack.”

“Traffic has been cut in half since the hike in rates,” one homebuilder in San Antonio opined. Another homebuilder in San Bernardino said, “Cancellations are starting to creep up due to loan declines and job losses. Waiting lists are certainly smaller. Saw an immediate change in buyer behavior when rates climbed over 5%.”

The pressure on lumber prices can be long lasting if the housing market slows down, home prices remain unaffordable, and given that the seasonal demand for lumber often seen during spring building months is not supporting prices so far this year.