Lumber producers are cutting back, a signal that higher interest rates are taking root 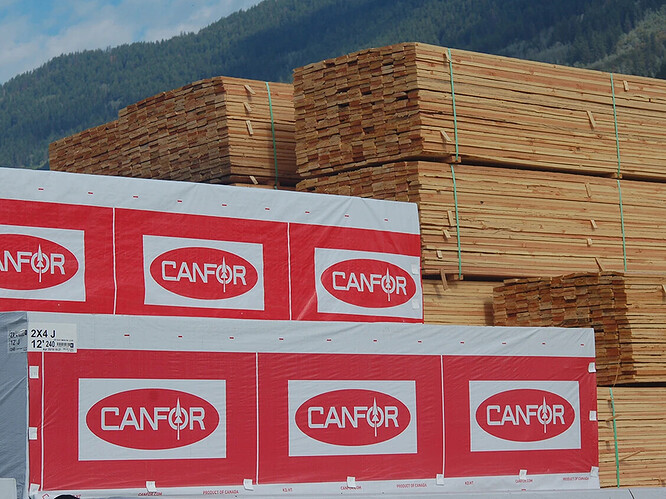 Lumber prices shot up early on in the pandemic in what proved to be a bellwether for rising inflation: stuck inside, many homeowners spent big on new decks, fences and other renovations and the increased demand for wood caused prices to take flight.

Economists often use that example to explain how pandemic policies such as social distancing created ripple effects in the economy, including a shift in consumer spending from services — think dining out or seeing a concert — to durable goods, which resulted in price inflation.

If lumber was an early indicator of where prices are headed, then the central bankers who are now trying to beat back the hottest inflation since the 1980s may take heart in recent signals coming from the lumber market.

“We are temporarily curtailing production in British Columbia due to reduced market demand,” Don Kayne, chief executive of Vancouver-based Canfor, said in a press release on Sept. 19.

Canfor’s news follows West Fraser’s August announcement that it would “permanently” curtail production at several B.C. facilities by eliminating shifts at several sawmills and plywood mills throughout the first quarter. It estimated the cuts would decrease wood production by an estimated 255 million board feet.

Both announcements tie into a multi-year trend in which B.C. lumber companies have been reinvesting their profits overseas, particularly in new operations in the southern United States.

That’s driven in part by the effects of climate change: Record wildfires in 2017 and 2018 destroyed huge swaths of forest and added to losses caused by the explosion in populations of mountain pine beetles, which also decreased the volume of available wood supply in B.C. Add in the flooding in 2021 that wiped out key transportation corridors, and production costs rose.

As West Fraser said in August, “access to available timber is an increasing challenge in British Columbia and ongoing transportation constraints have impaired the company’s ability to reliably access markets.”

Still, some analysts believe Canfor’s statement about softening lumber demand may signal that rising interest rates in the U.S., Canada and elsewhere are beginning to have the desired effect of cooling demand and thus tamping back inflation.

The Bank of Canada raised its benchmark interest rate by three percentage points between March and September, and probably isn’t finished. Statistics Canada on Tuesday said the consumer price index increased seven per cent in August from a year earlier, cooler than recent peaks of around eight per cent, but still well outside the Bank of Canada’s target of two per cent.

“Last week, I met with a bunch of home builders, and they’re seeing their order file drop by 30 to 40 per cent year over year,” said Paul Quinn, an RBC analyst who covers Canfor and other lumber producers. “So there’s no question, interest rates are definitely cooling the economy.”

Also on Tuesday, new data in the U.S. showed that applications in August to build new houses sunk to their lowest point since June 2020.

Such signs may suggest rising interest rates are beginning to cool the economy, but the path to lower inflation may take a few more twists and turns if lumber prices serve any indication.

Quinn said prices for lumber have been falling in recent weeks, to around US$500 per thousand board feet, and predicted Canfor’s announcement of curtailed production at its B.C. facilities would give prices a shot in the arm.