Maine forests at risk after discovery of southern pine beetle 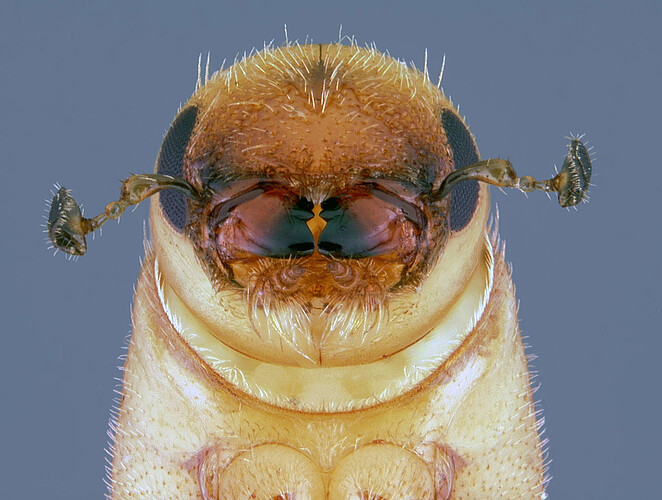 This Sept. 20, 2013, photo provided by the USDA Forest Service shows a southern pine beetle completing metamorphosis into an adult that will attack a pine tree at Kisatchie National Forest in Pineville, Louisiana. Credit:Erich Vallery / USDA Forest Service via AP

One of the most destructive forest pests in the Southeast has made its way to Maine. The southern pine beetle, which has destroyed millions of acres of pine forests in its native South, was discovered in Waterboro last fall. Scientists said the ecosystem of Maine’s pitch pine barrens is at risk.

Its Latin genus name Dendroctonus means “tree killer.” One southern pine beetle is only half the size of a grain of rice. Yet, its infestations are vast enough to be seen from outer space. This highly adapted tree killer prefers the “hard pine” species like red, pitch and jack, and is by nature epidemic.

“A couple singular beetles can’t really hurt a tree or they’re often in dead or dying trees,” said Caroline Kanaskie, the Ph.D. student from University of New Hampshire who discovered the insect in pheromone-baited traps in southern Maine last fall. “But when thousands of beetles are there together, and they’re communicating with these chemicals, they can mass attack single healthy trees and continue the cycle from there.”

“Pitch pine harbors an ecosystem that we call the pitch pine barrens that’s really unique. It has a bunch of unique plant and animal species. There are these butterflies that people study just in the pine barrens. This is the only place that they’re found, in the pine barrens of the northeastern United States,” she said.

“Maine has quite a bit at risk,” he said. “There are the inland pine barrens that are a globally rare ecosystem. There’s also the pitch pine community and jack pine community all up and down Maine’s coast are at risk. And then also the economic impacts to people that have red pine plantations that they were hoping to use as a piggy bank for a rainy day.”

Southern pine beetles use pheromones to recruit beetles from miles around and bore into trees in large numbers that overwhelm the trees’ resin defense systems. Once inside, they inoculate the inner bark with a fungus that feeds their larvae and magnifies the next attack wave. Since the last glacial maximum 12,000 years ago, the southern pine beetle has plagued forests from Mexico to Arkansas and rarely appeared north of Virginia, where a minus-5-degree night will kill it. But as winters get less severe, the beetle is moving north.

Outbreaks occurred in southern New Jersey in 2010, killing 14,000 acres of its iconic pine barrens. Then in 2014, parts of Long Island lost as much as 75 percent of their pine trees to the new insect. Scientists predicted it would reach northern New England by midcentury and were shocked when Kanaskie discovered it in Maine and New Hampshire so soon.

Though the beetle is a new problem in the Northeast, down South, foresters have been dealing with it for centuries and have developed effective management practices, according to University of New Hampshire forest health scientist Jeff Garnas.

“If you detect spikes in populations in a particular area, and then go up in an airplane, or increasingly drones, and look for spots of dead trees in the forest,” Garnas said.

Where infestations are mounting, loggers will harvest a swath of trees in their path. The infestation is stopped, and the logs can be hauled off and milled to cover expenses.

According to Schmeelk, dense, overgrown forests are more susceptible to outbreaks. The pitch pine barrens are a fire-based ecosystem. Prescribed burns and selective thinning make them more resilient to southern pine beetles. But as the insect expands north with warmer temperatures, Garnas says so do thousands of other new species.

“This is one example of a trend that’s only going to increase in coming years. It’s a bellwether in some ways,” Garnas said.

The sign of trees killed by southern pine beetles are the hundreds of blobs of resin where beetles bored in that look like popcorn and cover the trees’ bark. State officials and biologists urge members of the public who spot infestations to report them using the citizen science app and website EDDMapS.

This article appears through a media partnership with Maine Public.

What a nasty looking thing. I hope we take care of this beetle before any major problems arise…

“If you detect spikes in populations in a particular area, and then go up in an airplane, or increasingly drones, and look for spots of dead trees in the forest,” Garnas said.

I hope technology like drones will make it easier to fight the spread!