While there are multiple headwinds weighing on growth, further policy tightening is expected amid the need to bring down elevated inflation

Global economic growth prospects are confronting a unique mix of headwinds, including from Russia’s invasion of Ukraine, interest rate increases to contain inflation, and lingering pandemic effects such as China’s lockdowns and disruptions in supply chains.

In turn, our latest World Economic Outlook, released last month, lowered our global growth forecast for next year to 2.7 percent, and we expect countries accounting for more than one third of global output to contract during part of this year or next. Moreover, as we discuss in our latest report prepared for the Group of Twenty, recent high-frequency indicators confirm that the outlook is gloomier.

As the Chart of the Week shows, there has been a steady worsening in recent months for purchasing manager indices that are tracking a range of G20 economies. These survey-based measures gauge the momentum of manufacturing and services activity. 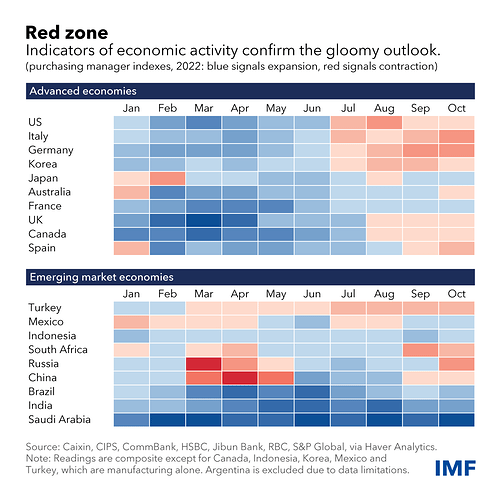 As the chart illustrates, readings for a growing share of G20 countries have fallen from expansionary territory earlier this year to levels that signal contraction. That is true for both advanced and emerging market economies, underscoring the slowdown’s global nature.

While gross domestic product releases for the third quarter surprised on the upside in some major economies, October PMI releases point to weakness in the fourth quarter, particularly in Europe. In China, intermittent pandemic lockdowns and the struggling real estate sector are contributing to a slowdown that can be seen not only in PMI data but also in investment, industrial production, and retail sales. This will inevitably have a significant impact on other economies due to China’s large role in trade.

Despite growing evidence of a global slowdown, policymakers should continue to prioritize containing inflation, which is contributing to a cost-of-living crisis, hurting low-income and vulnerable groups the most. As our G20 report emphasizes, the macroeconomic policy environment is unusually uncertain.

However, continued fiscal and monetary tightening is likely needed in many countries to bring down inflation and address debt vulnerabilities—and we do expect further tightening in many G20 economies in the months ahead. Nonetheless, these actions will continue to weigh on economic activity, especially in interest-sensitive sectors such as housing.

The challenges that the global economy is facing are immense and weakening economic indicators point to further challenges ahead. However, with careful policy action and joint multilateral efforts, the world can move toward stronger and more inclusive growth.