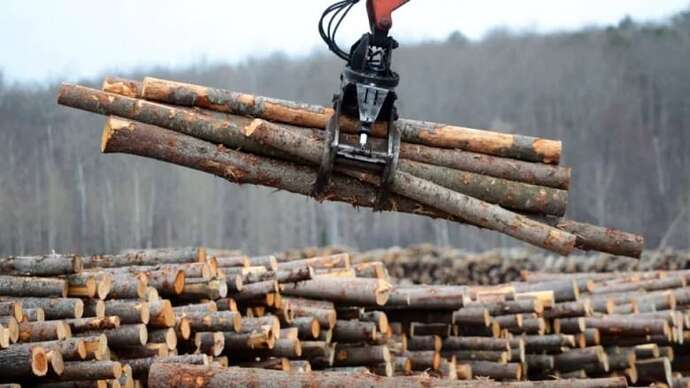 New Brunswick forest owners say prices paid by mills for logs in Maine are up to 70 per cent more than in New Brunswick. They blame low New Brunswick timber royalties for undercutting prices (Sean Kilpatrick/Canadian Press)

International lumber prices are surging again and private sellers of wood in New Brunswick say that’s been helping them get better prices for their softwood logs. In Maine.

Linda Bell, the general manager of the Carleton-Victoria Forest Products Marketing Board in Florenceville, said prices being paid for saw logs at mills across the border are up to 70 per cent higher than in New Brunswick. That makes the longer hauling distances and increased paperwork required to serve U.S. mills worthwhile, she said.

“What we’re seeing in Maine is is an increased demand and increased pricing,” said Bell, who estimated a quarter of softwood cut by private sellers in her area is now leaving the province.

“The price of lumber is up and their markets are really good.” 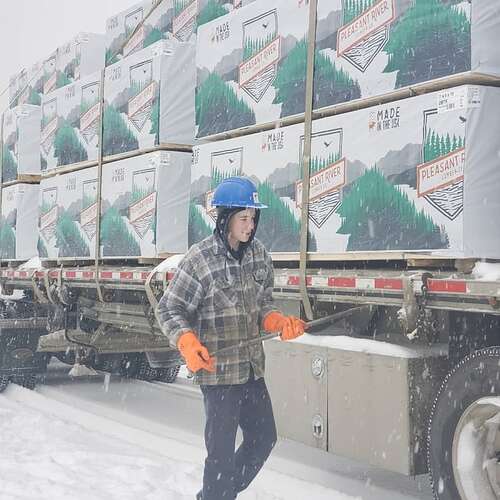 Prices for lumber in North America have almost tripled since August and are nearing record levels set last spring.

A series of shocks to lumber supplies, including historic flooding in British Columbia in November and Russia’s invasion of Ukraine, have taken turns roiling markets.

Russia is a significant global exporter of softwood lumber.

Much of its trade is with China, but tightening sanctions on Russia have “goosed” nervous lumber markets that were already elevated, according to wood product analyst Dustin Jalbert, who is with the online commodity price reporting service fastmarkets.com. 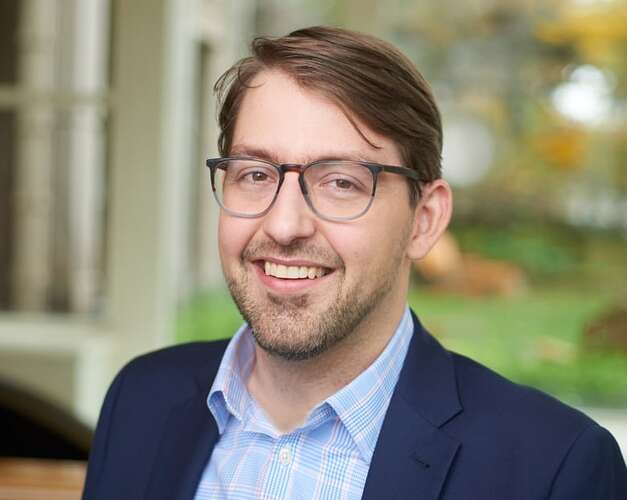 “Russia is probably the largest softwood timber resource on the planet and there’s a lot of lumber production,” Jalbert said in an interview.

“This Russia Ukraine situation is only adding to the fear out in the marketplace that there’s not going to be enough building material supply as we head into the prime home-building season.”

In New Brunswick, forestry companies have been setting revenue records during the pricing bumps, but those who cut and sell trees have complained for more than a year that little of that bounty has been making its way back to them or flowing to the province. 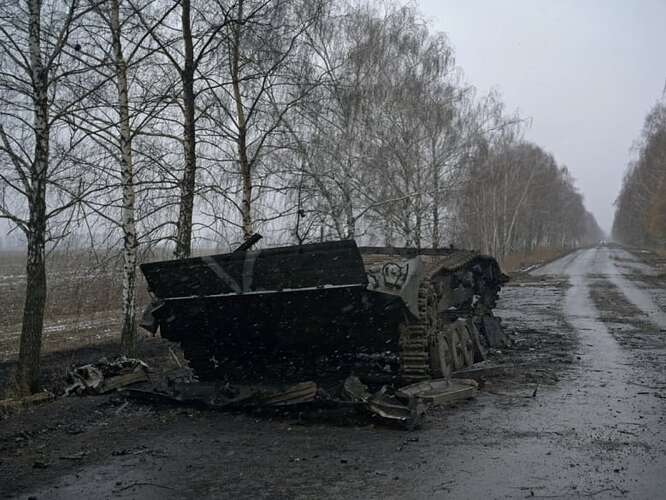 Russia is a major lumber exporter and sanctions imposed on the country following its invasion of Ukraine have caused worry in lumber markets. (Maksim Levin/Reuters)

Private sellers contend that because the New Brunswick government does not raise the price it charges for trees to match rising lumber prices as most provinces do, prices they can charge mills as a result are kept artificially low.

“When they’re getting subsidized rates from Crown and a lot of their supply comes from Crown they don’t need our wood,” said Bell.

“Therefore, the price is down and the demand is just not there.”

Softwood logs are loaded for processing at the J.D. Irving Ltd. sawmill in Chipman. New Brunswick wood product mills made a record $2.6 billion in 2021 but paid the same timber royalty rates they did in 2016. (Gerard Sirois/GNB)

That was $1.3 billion higher than sales in 2016 even though prices charged to forest companies by the province for the use of Crown wood in both years were identical.

That’s different from most provinces, which move what they charge for trees up and down with the price of lumber to connect the value of trees to the value of goods they are turned into.

In British Columbia, timber royalties have more than doubled in three years as lumber prices have risen.

B.C. has made $558 million more from timber royalties than it was budgeting this year alone, and those royalties are set to jump again on April 1, when rates are next updated.

Next door in Alberta, timber royalties change even faster. They have jumped five times since September and in March hit prices four times higher than what New Brunswick is currently charging.

“Timber dues rates are based on the current market prices of forest products,” the province explains on its website

“These charges ensure Albertans receive fair compensation for the use of publicly owned forest resources.” 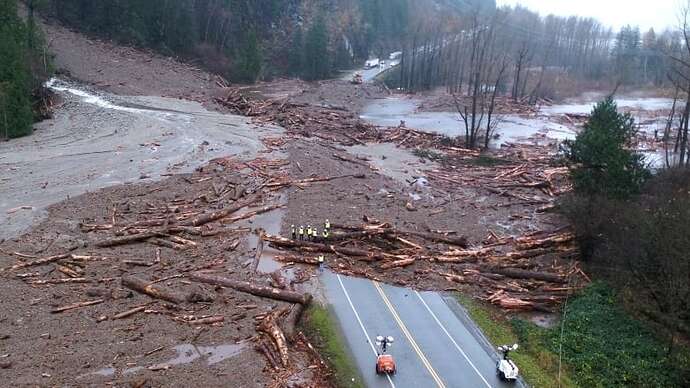 Historic flooding in British Columbia in November that paralyzed transportation routes such as Highway 7 at Ruby Creek is one of several factors that have been pushing lumber prices up for the past seven months. (B.C. Ministry of Transportation and Infrastructure)

Holland said New Brunswick’s “stable steady” approach, where it set rates back in 2015 and has not changed them since, has been better over the long term.

“I’ve explained it several times that if we had to follow that model of chasing the commodity from 2015 that Alberta did, because of the significant swings not just high but low, there would been over $50 million over that five-year period that we as New Brunswick would have left on the table,” Holland told reporters last spring.

But that analysis no longer holds.

Alberta timber royalties have averaged more than double New Brunswick’s in the last year because of high lumber prices. They would have raised $100 million more than New Brunswick rates could raise had they been used instead.

That means over the last six years New Brunswick’s royalty system raised $50 million less from forestry companies than Alberta’s system would have. 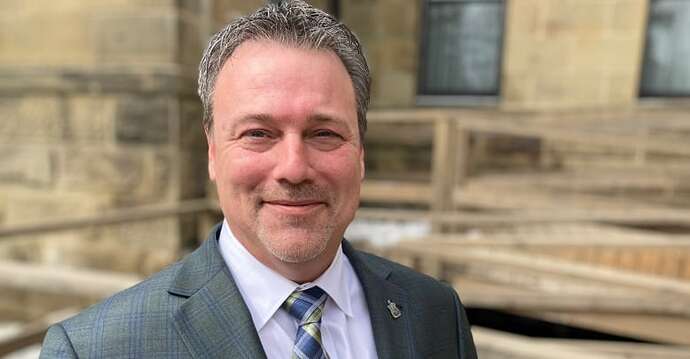 Natural Resources and Energy Development Minister Mike Holland said last year that New Brunswick made $50 million more over five years from timber royalties than if it had tied rates to lumber prices like Alberta. Over six years the amount has flipped to $50 million less. (Jacques Poitras/CBC)

Holland’s office did not immediately respond last week to a request for comment about the current resurgence in lumber prices or whether the province might reconsider its position not to tie the price of trees in some way to the price of lumber, given revenues other provinces have been raising.

Bell hopes the province does consider it.

She said higher prices New Brunswick sellers are getting for their logs in Maine than they can get at home tells her prices locally are artificially low.

She believes higher timber royalties imposed during strong lumber markets would be affordable for companies, raise more money for the province, and let local sellers charge amounts similar to what jurisdictions pay.

“They have no Crown wood. They’re on an open market,” Bell said about the trade for logs in Maine.

“We’re seeing pricing closer to fair market values there, than what we see in New Brunswick.” 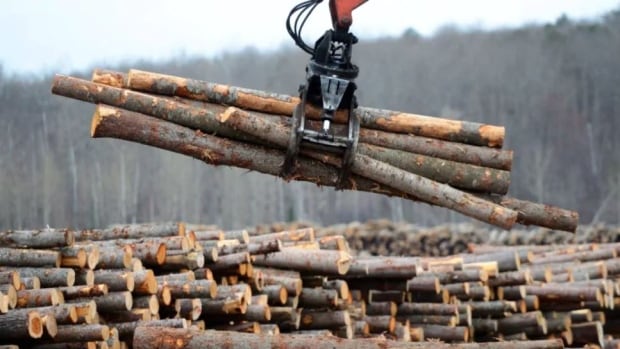 International lumber prices are surging again, and private sellers of wood in New Brunswick say that's been helping them get better prices for their softwood logs. In Maine.