The journey from seed to harvested Christmas tree is a long, winding road 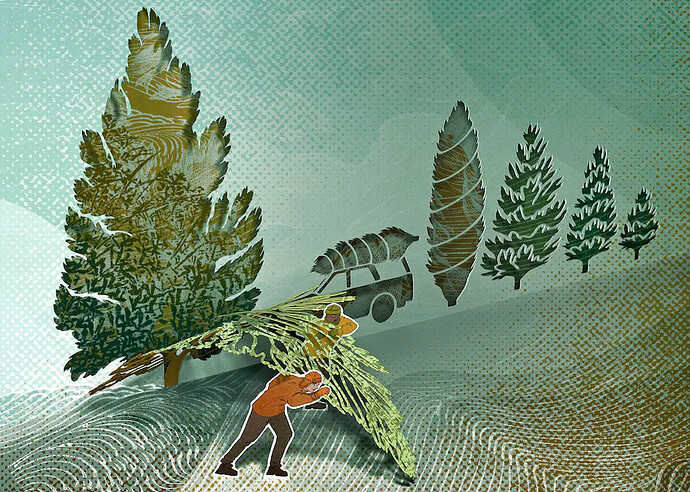 In the spirit of the holidays, here is a story about where Christmas Trees come from curtesy of Chris Moody at the Washington Post, enjoy!

Placed among a neat row of fresh-cut evergreen trees, an eight-foot Fraser fir with a thick coat of needles stands like a handsome sentinel in a crowd of green. The tree, selling for $145 at the Bru-Mar Gardens nursery in Annapolis, Md., is a real beauty: It resembles a cone, with long, sturdy branches at the base that gently taper higher along the trunk. The needles are thick enough to hide behind. At its top, a single lean branch is a throne suitable for an angel or a glowing star. If all goes to plan, a family will take the tree home and adorn it with lights, ornaments and tinsel.

It will, at last, fulfill its destiny as a Christmas tree.

Evergreens like this one are not — to borrow a phrase from Lady Gaga — born this way. Christmas trees owe their existence, survival and specific shape to years of painstaking care and attention.

“A lot of people don’t realize the story behind what’s at the centerpiece of their family holiday Christmas,” said Beth Ann Bossio, a tree farmer at the Quarter Pine Tree Farm in Smithfield, Pa. “It’s a lot of love and patience from these farmers and a lot of years.”

Evergreens have played a role in winter celebrations for thousands of years. Long before Christians began setting up trees in their homes to mark the birth of Jesus Christ, people around the world marked the return of winter by decorating their private and public spaces with greenery. Ancient Egyptians adorned their homes with green date palm leaves; Romans observed Saturnalia by surrounding themselves with evergreen boughs; and the pre-Christian Druids hung mistletoe.

Records show Germans bringing evergreen trees into their homes at Christmastime in the 16th century, a tradition Americans began embracing with gusto in the 1800s.

The story of how a tree like the conifer in Annapolis finds its way to a living room involves a journey of hundreds of miles and more than a decade of meticulous care.

Long before a salesman in Maryland hung the price tag from the branches of this fully formed fir in 2021, its life began, as all trees’ lives do, as a tiny seed. That seed may never have amounted to much without the help of Johnny Wishon, a tree farmer in North Carolina’s Blue Ridge Mountains, whose team climbed up an old fir tree one day in early fall 2009 and plucked a cone full of seeds from its branches.

Wishon sowed the seed in a small cup of dirt and fertilizer, then placed it in a Styroblock, a three-inch-deep cylinder with the diameter of a quarter. Inside a greenhouse, he monitored the moisture and nutrient level, which was crucial to keeping the seedling alive.

“This is a very vulnerable time for them,” Wishon said. “We are constantly monitoring them.”

Fir trees thrive in cool weather, and the seedlings are sensitive to heat. When the following summer arrived, Wishon had to be particularly attentive as temperatures rose in the greenhouse.

“If the temperature gets too hot, every tree in the greenhouse can die,” Wishon said. “I have seen some disasters where someone will have thousands of trees die in a 24-hour period of time because it gets too hot.”

Wishon installed fans in the greenhouse, kept the plantings moist and monitored the temperature, keeping it below 80 degrees Fahrenheit.

The seedling put down roots and grew to be about six inches tall after its first year. By then, it resembled a narrow stick with tiny green leaves. The following spring, Wishon transplanted it to an outdoor pot, where the risks to its life increased.

Because evergreens require an ample supply of water to survive, farmers go to great lengths to keep them hydrated, often through irrigation. But sometimes, even the most robust efforts can’t compete with the forces of nature. A devastating heat wave that hit the Pacific Northwest in June killed thousands of trees on farms in Oregon, which supplies more trees than any other state. Many older trees persevered, but seedlings couldn’t survive the scorching heat. Their little green needles turned brown, and the trees died. Annual wildfires in the West have also reduced the amount of land available to grow trees. These forces of climate change have reduced the number of trees available for sale and raised the cost for consumers.

In times when heat isn’t threatening trees, cold weather is. Unseasonable frosts can damage new growth on evergreens. Two years ago, a late frost in May damaged the tips of Douglas firs on Bossio’s farm in Pennsylvania.

Pests of all kinds also pose a constant threat. Insects and deer above the ground, or fungus and grubs below, can end a tree’s life.

“There’s not a tree species that doesn’t have some pest,” said Ryan Clouse, a tree farmer in Frederick County, Va., and the president of the Virginia Christmas Tree Growers Association. Without proper attention, “they will eat you out of house and home.”

To ward off deer, farmers often invest in fencing, which can cost around $6 per linear foot. With thousands of acres to protect, the price quickly adds up. Wishon’s farm has a nine-foot fence to keep out deer. Farmers who don’t fence in their land invest in ammunition instead. Deer that venture onto Christmas tree farms in search of a snack rarely make it out alive.

Farmers spend a lot of time protecting the tree’s “leader,” the branch that extends from the top, where you balance the tree topper. One chomp from a deer could deform it. White pine trees are susceptible to weevils that can lay eggs in the leader. When they hatch, the larvae eat down the middle and kill it.

The key to fighting off bug threats, Wishon said, is vigilance.

“We are scouting our trees to make sure we don’t have bad bugs in there,” he said. “We don’t spray anything unless we have to.”

Luckily, the little Fraser fir thrived in its pot for two years, avoiding hungry deer, bugs, winter frosts and summer heat. In 2013, Wishon removed the sturdy 18-inch-tall tree from its pot and carefully replanted it in the ground, on a north-facing hillside on his farm.

Evergreens grow best on hillsides in higher altitudes, where the vertical slope keeps water from pooling around them. Trees planted without drainage can suffer from what farmers call “wet feet,” which reduces the oxygen in the ground and kills the roots.

In summer 2014, Wishon and a team of workers started culturing the tree to help it grow into its quintessential Christmas tree shape. Because heavy machinery can’t maneuver the steep hillsides, the work must be done by hand, one tree at a time.

Where Christmas trees come from

They repeated the work of culturing the tree every summer for the next seven years, using a pair of hand clippers and a long shearing knife. Clipping the trees in the right places gives them a “full” look, while trimming the sides gives it a conical dimension.

“If you let them grow naturally in the wild, it would be a totally different-looking tree,” Wishon said.

In summer 2021, workers scoured the farm for trees ready to harvest. Eight feet tall, with a healthy-looking leader standing straight above a shapely cone of green, the tree was fit for harvest. After more than a decade of growth and care, it was time to leave the farm.

Workers hung green tags on the tallest trees, while smaller ones got yellow tags. For trees with defects, such as holes, or ones with less-than-perfect leaders, they drew polka dots on the tags.

The harvest began in late autumn. Hundreds of workers were hired for the massive job of cutting down, preparing and shipping some 50,000 trees in only a few weeks. One crew cut down tagged trees using a chain saw, and another carried them to a nearby road. A third team hauled each tree through a baler that wrapped them tightly with twine for safe transport. (On some large farms, teams use helicopters to harvest trees to save time.) The trees were sorted by size and grade, then loaded onto tractor-trailers with care to avoid damaging the tops.

Back in his office, Wishon made a flurry of phone calls and wrote emails confirming arrival times to clients. Working with trucking companies, he organized the logistics for delivery to locations in nearly every state east of the Mississippi.

Shortly before Thanksgiving, a crew loaded the tree with around 500 others onto a tractor-trailer headed for Bru-Mar Gardens, about 385 miles away in Annapolis, where it would patiently await purchase and its star turn as someone’s Christmas tree.

But that’s not the end of the story. The cycle of a Christmas tree can extend far beyond the holiday season. When Christmas is over, and the ornaments and lights are carefully put back into their boxes, many cities recycle trees by breaking them down into mulch, which can be spread on gardens to protect the soil beneath and suppress weeds. An old tree also can be propped up in a backyard to serve as a home for nesting birds or sunk into a pond, where fish will lay eggs in the shelter of the branches.

Meanwhile, Wishon and tree farmers like him will soon be returning to seed orchards to climb back up an old tree in search of fresh seeds to start the cycle again.

After years of working in the business, Wishon knows the seed won’t reap him a profit for at least another decade. It’s the Christmas season, he said, that makes it all worth it.

“Knowing that what you’re doing is going to be the centerpiece of somebody’s Christmas, that’s a pretty cool thing,” he said.

Chris Moody is a freelance writer in Chattanooga, Tenn.