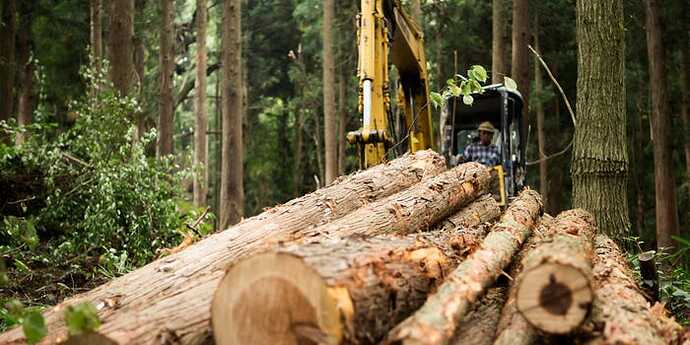 Lumber prices have been on a wild ride in the last few years, but they could soon get less volatile, even with trading volume set to soar.

Along with other top commodities, lumber prices have seen big swings since the pandemic. They collapsed below $300 per thousand board feet in early 2020, jumped to $1,000 later that year, crashed again, soared past $1,700 in May 2021, tumbled back down, rebounded to nearly $1,500 in March of this year, plunged yet again, and are now below $600 as the housing market slows down.

Earlier this year, leading lumber futures were so wild that they routinely hit their daily limit-down or limit-up price triggers, freezing trades for the remainder of the session and prompting the industry to look for ways to make the market more liquid.

Now, CME Group is launching a new lumber futures contract August 8 that is meant to facilitate deliveries and draw in more participants, potentially smoothing out prices with a number of changes.

Among them is allowing trucks to fulfill contracts, instead of just railcars. For reference, a truck can carry enough lumber for two houses, while a railcar can carry enough for eight, lumber trader Stinson Dean told Insider.

Since trucks carry about one-quarter the amount of lumber, the new futures contract gives more buyers the ability to hedge off smaller projects that didn’t fit the old contract’s sizing, he said via email.

A contract for a quarter the amount of lumber, in theory, should quadruple trading volume. But Dean said that is likely just the baseline, and predicted volumes could increase by eight or 10 times “as more and more lumber futures observers become confident lumber futures traders.”

In addition, the lumber purchased via the new contracts will arrive in Chicago rather than a distant Canadian outpost, which will provide a more central trade destination that is accessible for a wider range of buyers.

And CME’s new specifications will also allow for new types of lumber, including eastern species of spruce, pine, and fir, rather than only lumber harvested from the West.

Dean expects lumber will become less volatile and trade sideways the rest of the year. But the new futures contract is perfectly suited to a slowing housing market, he added.

“As price and activity come down, folks will want to buy as little as possible, and the new contract allows them buy one-quarter of the quantity in one contract vs the old contract,” he said.

I imagine the CME’s new specifications will also allow for imported Euro Spruce. Is that correct?

This is the best i could do for a FAQ sheet. See number 17. 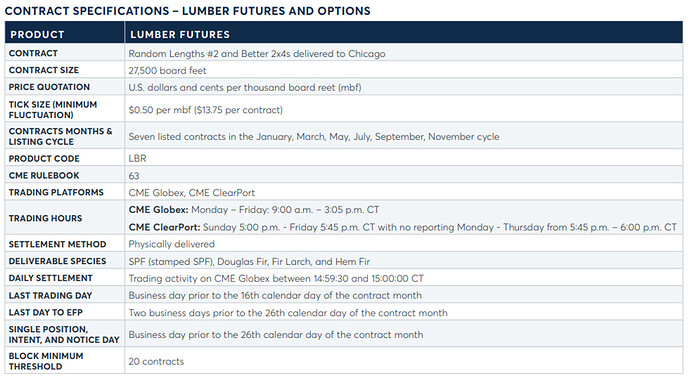 The delivery point has also been set to Chicago Switching District where the futures will be physically delivered “allowing for a wider breadth of market participation from both western and eastern producing mills.”

@David_Bagdy Do you know if Euro Spruce falls under Stamped SPF?

I’ll check. I do very little 2x4. I believe some of the mills in Germany and Austria are WCLIB mills, so yes.

Very interesting! Have you heard of any Euro taking Chicago as a port?

@Jim_Schumacher @Madison_s_Lumber_Rep @Michael_Haas Have you heard anything about the possibility of euro fitting into this contract?

It might be stamped SPF but not a North America stamp.
So graded in EU.

I highly doubt that non-North America wood would be included in the specs.

My opinion is that this change on the CME will align Futures price more closely to cash … which it is legislated to do at the end of each Contract.
I think these new specs will bring down the wild swings / volatility during the Contract cycle.

There are Euro mills that are certified by the WCLIB. “The WCLIB provides grade inspection and supervision services to member mills in the western states, and throughout the continental U.S. and Europe.”

My opinion is that this change on the CME will align Futures price more closely to cash … which it is legislated to do at the end of each Contract.
I think these new specs will bring down the wild swings / volatility during the Contract cycle.

Hopefully some good comes out of these changes. Looking forward to seeing how this develops!

It might be stamped SPF but not a North America stamp.
So graded in EU.

Do you know if they are specifying origins? I’d bet many Euro buyers would be interested in futures many of them get played in the market given their information and transport time disadvantage when shipping across the sea.