# Monitoring the Giants: Tracking Resilience of Giant Sequoias After Wildfires

The tag designates a witness tree, which serves as a survey tool. Using three witness trees to triangulate the center of the plot makes it easier for future crews to find the site for monitoring work. (USDA Forest Service photo by Jamie Hinrichs) 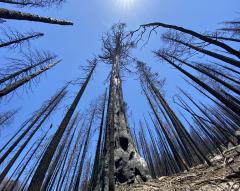 The accumulation of low-growing vegetation close to giant sequoias – called ladder fuels – enabled flames to grow and climb into the crowns of neighboring tall trees and the monarchs – the largest giant sequoias. Most in this section of the grove on the Sequoia National Forest were burned directly and had no foliage, while a few were burned indirectly by the fire’s intense heat and had brown needles remaining. Either way, the absence of green crowns indicates a giant sequoia is dead. Without green foliage, this evergreen tree cannot convert sunlight into sustaining energy to survive. (USDA Forest Service photo by Jamie Hinrichs)

In the presence of a giant sequoia (Sequoiadendron giganteum), there is no lack of wonder. There is settling stillness as eyes lift to these giants’ amorphous yet signature crowns. For the viewer standing in the shadows, it is impossible to fully digest their immensity and antiquity. Each iconic tree has lived hundreds, even thousands of years, through many wildfire seasons.

Standing within view of a giant sequoia killed by a high-severity wildfire evokes a different kind of wonder. Giant sequoias are naturally fire-adapted species designed to withstand and benefit from fire. Their fire-resistant bark grows upwards of two feet thick, helping to protect the inner core of the trunk that transports water and nutrients from root to limbs. Their semi-serotinous cones often capitalize on the drying effects of a fire’s heat to release their seeds. They also have self-pruning lower branches and elevated crowns, making them less susceptible to torching – burning from the bottom up – in comparison to nearly all other conifers. 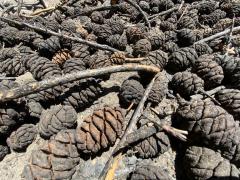 Giant sequoia cones open and drop their seed during fires, which normally leads to the next generation. However, in high-severity fires, the temperatures are so extreme the seeds cook and become nonviable (unable to develop). Seeds that manage to germinate into seedlings in high-severity patches, soon dry up and die from lack of soil moisture and excessive heat. And when high-severity fires kill mature sequoias, the chances for a naturally regenerating forest are lost. (USDA Forest Service photo by Jamie Hinrichs)

Given their fire-adapted traits, it stands to reason these might be trees we could worry less about during a wildfire, but that all depends on the type of wildfire. And the tree. For example, in Sequoia National Park, firefighters recently wrapped aluminum blankets to add protection to giant sequoias, including the 2,300-year-old General Sherman, the world’s largest tree at 275 feet tall and more than 36 feet in diameter at the base.

“Giant sequoias evolved with a frequent, low-to-moderate severity fire regime, where flames kept closer to the ground and had minimal impact on the tallest trees in the overstory,” said Marc Meyer, a Forest Service ecologist. “However, the uncharacteristically large and severe wildfires that are becoming more common in sequoia groves in recent years are increasing large sequoia mortality at an alarming rate.”

Many factors play into this change in fire severity, one of which is having too much hazardous fuel (live and dead vegetation that is prone to burn) on the ground after more than a century of fire exclusion. Recognizing the risks posed to giant sequoia groves by the current crowded conditions, the Forest Service recently initiated emergency fuel reduction. 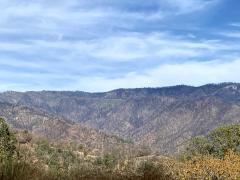 The 2021 Windy Fire burn scar is clearly visible on the slopes of the Sequoia National Forest. (USDA Forest Service photo by Jamie Hinrichs)

This plan provides for the long-term survival of giant sequoia groves against immediate wildfire threats. In the last two years alone, wildfires have destroyed nearly one-fifth of all large giant sequoias, which grow naturally only in a narrow 60-mile band on the western slopes of the Sierra Nevada.

This summer, Marc Meyer is supervising a crew from the University of California, Davis, to monitor post-fire effects on giant sequoia regeneration and large sequoia survival within the burn scars of some recent fires. One such fire includes the 2021 Windy Fire on the Sequoia National Forest.

“Post-fire monitoring will facilitate a better understanding of how forest density drives giant sequoia mortality and will inform the management of both burned and unburned groves,” Meyer said. 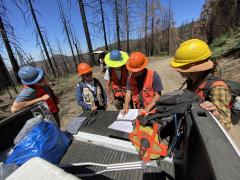 Recently, the crew of six natural resource specialists camped together for eight days on the Sequoia National Forest. They spent the days working in the grove to gather a variety of observational and quantitative data. (USDA Forest Service photo by Jamie Hinrichs)

“The Sequoia National Forest will be able to use the regeneration data to prioritize areas for reforestation and the data on post-fire hazardous fuels to identify groves that require follow-up restoration treatments, like thinning or prescribed fire.”

In our present age of high-severity wildfires, post-fire monitoring reminds us that what we learn from loss enables us to develop proactive measures to enhance our forests’ long-term survival. This evolving understanding unfolds at the pace of nature, different from the speed that our culture of instantaneity has come to expect for solutions.

Patient, enduring observation may just be the key ingredient of reclaiming and maintaining resilience, for our giant sequoias and ourselves.