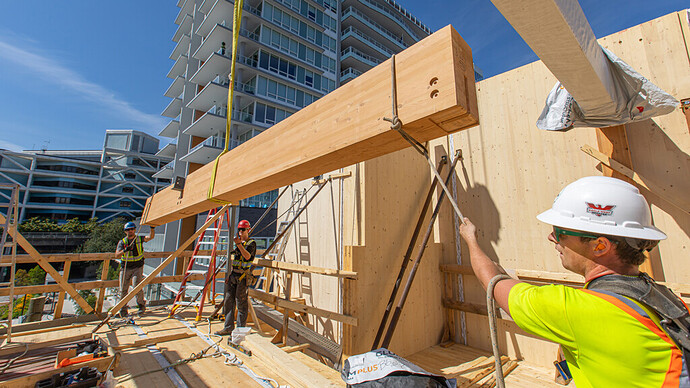 Canadian public and private sectors have partnered to conduct a series of fire research tests on a mass timber structure in Ottawa.

The largest burn, which will consume a purpose-built two-storey building, will take place at the end of June. Additional fire tests will occur over the summer.

The Ottawa Large-Scale Test, as it is called, will have three fire scenarios.

The second fire will take place at fully-furnished residential apartments made of exposed mass timber. The results will be compared to those of the first fire.

The third burn will be a construction site dumpster fire to demonstrate the performance of exposed mass timber.

The objective of the tests-by-fire is to show mass timber construction is a safe and viable alternative to steel and concrete in the construction of large or tall buildings.

Ottawa-based CHM Fire Consultants Ltd. is overseeing the tests, which will be run by Natural Resources Canada at the Canadian Explosives Research Laboratory.

“It will be the largest mass timber fire test in North America,” said CHM principal and co-founder Steve Craft.

Unlike most real-life fires, the Ottawa tests will be allowed to run their course.

“It will be a rare scenario,” said Craft. “No sprinklers will go off. We assume there’s been a failure and the fire department won’t show up. We expect the fires will burn vigorously for a while and then die down on their own.”

The Ottawa fires are the second half of the Mass Timber Demonstration Fire Test Project, one of a dozen mass timber demonstration and research projects that are intended to accelerate the adoption of mass timber building systems.

The first part of the fire test program was the Richmond, B.C. small-scale demonstration pilot project, which took place in June 2021 at a test site in the Vancouver suburb.

“We proposed and developed the test plan for the Richmond tests and co-ordinated and managed the test in conjunction with the Canadian Wood Council and the Richmond Fire Department,” said GHL principal Andrew Harmsworth.

“There are concerns about the safety of mass timber compared to frame construction, and mass timber buildings under construction,” said Harmsworth. “What we found was that the unprotected wood frame was destroyed and that mass timber had significant inherent resistance to fire.”

The data from the fire tests will be used to educate “key stakeholders” about the performance of mass timber construction and to support future code change proposals and new fire suppression systems.

The cost of the tests is being shared by Natural Resources Canada, National Research Canada, and the B.C. and other provincial governments. Lessons learned will be made available to other Canadian jurisdictions.

“In Canada there are restrictions on the use of mass timber in construction,” said Marc Alam, manager, codes and standards – fire and acoustics at the Canadian Wood Council. “We want to find out if some of those restrictions can be lifted.”

According to the Canadian Building Code, building materials are, like wood, combustible or, like steel and concrete, noncombustible.

“But mass timber, because of its size, is inherently resistant to fire,” said Alam. “Fire creates char on the wood surface, which helps protect and insulate unburned wood below the char layer, which eventually burns itself out as the fire dies down.”

The fire test is one of a dozen mass timber demonstration and research projects being undertaken to reduce the early costs of design development, research, permitting and construction, and thereby encourage urban planners and developers to adopt mass timber building systems in B.C.

The Mass Timber Demonstration Program is led by a Crown agency of the B.C. government.

On top of that program, the government recently announced the launch of the Mass Timber Action Plan.

According to the government, B.C. could have as many as 10 new mass-timber manufacturers by 2035.

Canadian public and private sectors have partnered to conduct a series of fire research tests on a mass timber structure in Ottawa. The largest burn, which will consume a purpose-built two-storey building, will take place at the end of June....