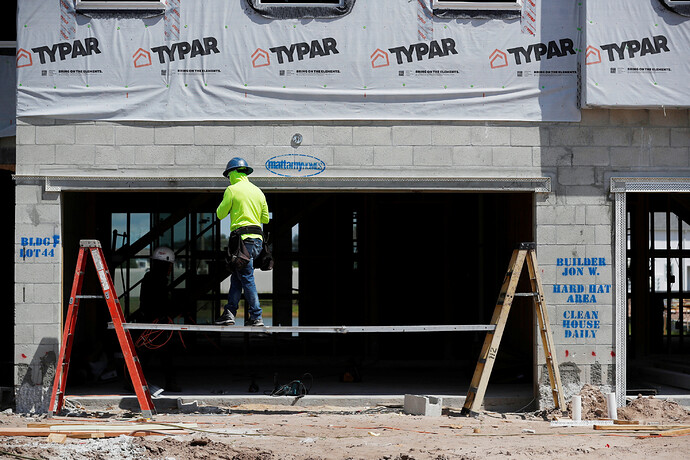 Housing boom comes to Florida2938×1959 1.99 MB
WASHINGTON, Nov 17 (Reuters) - U.S. homebuilding fell sharply in October, with single-family projects dropping to the lowest level in nearly 2-1/2 years, as the housing market buckles under the strain of surging mortgage rates, which are pricing out potential homeowners.

Housing starts decreased 4.2% to a seasonally adjusted annual rate of 1.425 million units last month, the Commerce Department reported on Thursday. Data for September was revised higher to a rate of 1.488 million units from the previously reported 1.439 million units.

Starts for housing projects with five units or more slipped 0.5% to a rate of 556,000 units. Multi-family housing construction has fared better as the soaring mortgage rates force many potential home buyers to remain renters. A key gauge of rents surged by the most on record on a year-on-year basis in October, according to the latest consumer price data.

Mortgage rates have jumped in response to rampant inflation, which has compelled the Federal Reserve to unleash the fastest interest rate-hiking cycle since the 1980s. The 30-year fixed mortgage rate is averaging above 7%, the highest since 2002, according to data from mortgage finance agency Freddie Mac.

Data on Wednesday showed confidence among single-family homebuilders fell for an 11th straight month in November, pushing the National Association of Home Builders (NAHB)/Wells Fargo housing market index to the lowest level since June 2012, excluding the tumble during the initial wave of the COVID-19 pandemic in the spring of 2020.