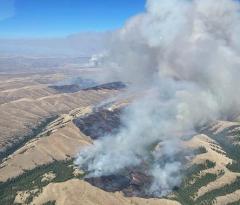 Editor’s note: The USDA Forest Service recently announced a 10-year strategy to confront the wildfire crisis and improve forest resilience. The agency will work with partners over the next decade to treat up to an additional 20 million acres on National Forest System lands and up to an additional 30 million acres of other Federal, State, Tribal, and private lands. This article highlights how these types of treatments can make a difference when fighting extreme wildfire and how they can reduce risk.

When lightning storms sparked the dry hillsides above Asotin, Wash., in early July, they touched off a series of wildfires, including the Lick Creek Fire, that quickly grew by tens of thousands of acres and threatened nearby homes. Luckily, years of proactive fuels treatments on the Umatilla National Forest helped to slow the fire’s advance, giving land managers better options to fight it.

The forested lands that the Pomeroy Ranger District manages are mostly located in southeast Washington, just west of the Snake River and Lewiston, Idaho. The area had been experiencing record drought while immersed in an extended heat wave by the beginning of summer, along with much of the Pacific Northwest. This was one of the driest years on record for Asotin County according to NOAA’s Drought.gov. After sustained, record temperatures of 110 degrees or more, the forest was incredibly dry and fire danger was extreme. 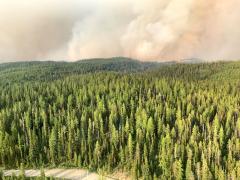 On July 7, multiple new fires were reported across the county following widespread thunderstorms that delivered lightning without rain. The fire starts grew rapidly in the strong afternoon winds, with two of the fires (Lick Creek Fire and Dry Gulch Fire) burning together, and a third fire (Silcott Fire) spreading toward the community of Asotin. The fast-moving fires prompted multiple evacuations.

Over the next several days, the hot temperatures persisted, and the wind was relentless. The Lick Creek Fire advanced to the south and southwest with such intensity that most control lines were no use in stopping it. Scratching away the vegetation with a hand tool or a bulldozer has little effect in slowing a wind-driven wildfire that races through the treetops during furnace-like conditions. Thankfully, the fire behavior changed when it reached areas where the Forest Service had recently completed fuels and forest health treatments.

When the fire advanced into previously treated areas, like thinning units or places where prescribed burns had taken place, fire managers witnessed a wildfire that burned with less intensity and smaller flame lengths than the unchecked head of the fire that was running through untreated areas. As the fire behavior diminished within the treatment areas, firefighters gained more time to stop the fire’s spread using nearby ridges and roads to build control lines safely and effectively. 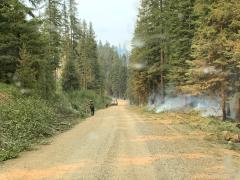 In previous treatment areas, there is more spacing between trees and less ground fuel to burn, making it safer and easier for firefighters to ignite back fires and create control lines. (USDA Forest Service/Umatilla National Forest)

These projects often involve reintroducing fire to fire-adapted landscapes, but it’s not safe or desirable to reintroduce fire into forests that are overgrown. A forest thinning is typically needed first to reduce the number of trees to something approaching the historical level a century ago. Then a low-intensity ground fire can follow—what professionals call a prescribed fire, as in a prescription that a doctor might give you, only in this case it’s a prescription to reduce fuels and restore forest health.

The thinning treatments on the Pomeroy Ranger District happened over the course of a decade and were designed to protect important infrastructure, like campgrounds and cabins, and to make the landscape more resilient to large-scale disturbances, like wildfires, insects, and disease. For example, treatments along a main forest road were completed as part of the Upper Charley Subwatershed Ecosystem Restoration Project- to reduce fuels and the risks of stand replacing wildfire to the area. The Upper Charley project treated 6,900 acres, including 4,600 acres of prescribed burning. 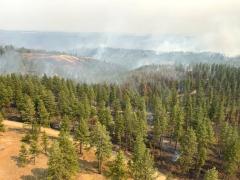 Previous treatments like timber harvest and prescribed fire, including this treatment area along Forest Service Road 42, were beneficial in suppression efforts and reduced the overall amount of time there was fire on the ground. (USDA Forest Service/Umatilla National Forest)

The Pomeroy Ranger District, like many Forest Service ranger districts, has worked to achieve restoration by implementing projects that reduce fuels in strategic locations and in areas that historically experienced low severity fires. Prior to treatment, many project areas consisted of dense, overstocked mixed conifer stands loaded with dead and down fuels. After the treatments were completed, the stands were open and a low intensity ground fire had burned through the available underbrush, much the way it would have done two centuries ago.

This fuels reduction approach has been employed across the Umatilla National Forest, and specifically within the vicinity of the Lick Creek Fire the district has treated more than 35,000 acres and completed approximately 27,000 acres of prescribed burns. The restoration in this area has also produced 78 million board feet of merchantable timber for private industry, a critical partner in forest management that brings needed tools and expertise.

The Lick Creek Fire was declared 100% contained on Aug. 27 after burning more than 80,000 acres, which accounted for nearly 10 percent of the total acres burned across the state of Oregon this year. No structures were lost during the Lick Creek Fire.

Learn more about the Lick Creek Fire and other wildfires on the Umatilla National Forest this year by visiting this storymap.