Well the drops we saw last the last few weeks appear to have come to an end. Trading momentum from the last couple weeks continued after the mild increases on Tuesday night into some more substantial increases tonight. Overall, the six week downtrend has ended with a composite price (an aggregate of all lumber species and lengths) rose $26/m. A lot of buyers noted that the last few weeks were used to procure volume for building needs in the immediate future, while still holding off on some purchases until there is more stability in the housing market. Green and Kiln Dried Douglas Fir both saw fairly mild increases from $20-45, while Inland KD saw bigger gains, including triple digit increases across 2x10 and 2x12.

Some hesitation in buying came from the first quarter GDP report that came out this week showing a 1.4% decrease at annualized pace. This was concerning for many who thought that our economy would be reinvigorated after two years of a pandemic.

Mortgage rates actually stopped going parabolic for the first time in a few months and continue to hover around 5%. While these rates have stagnated for the last week that does not mean they will not continue to rise over the next year, they almost certainly will. These higher rates, along with record high prices, are likely to keep many first time buyers out of the market which is an issue of concern we will continue to monitor.

Some tough news came out of Canada this week, with officials stating that they will have to cut harvesting by about 12% this year due to losses from fires, mountain beetle infestations, and old growth logging deferrals. We knew Canada’s production was going to be down this year already, we just now have a more exact picture of the scope. 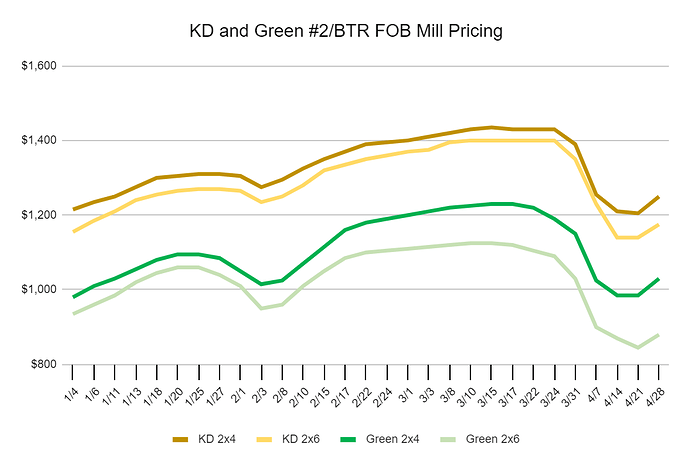 Do you have any idea when the cuts for Canadian harvests will go into effect and what regions are most effected?